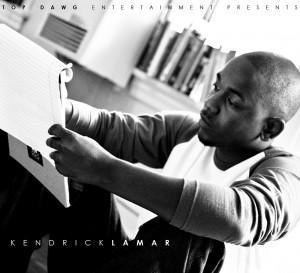 [Kendrick Lamar]
It's like I don't think you fully understand who I am, y'know?
I'm just a good kid from Compton that wanna rap
I don't represent no colors, I represent my lil' sisters and brothers
I'm the oldest, nigga
And if you can't respect that, your whole perspective is wack
Check it out

I used to wanna rap like Jay-Z
until I finally realised that Jay wasn't me
I took my time to jot down every line that's a quotable
Critics say I don't be killing this shit but I know I do
because I used to practice early morning and then after school
I'm working on my hooks my nigga, I ain't tryna battle you
But even if I did, I guarantee I'd overshadow you
Like a fucked up taper that turned to bowl cut
I'ma close cut to Common and Gucci Mane
Now that's a comparison that you probably wouldn't understand
Because I can touch the people and still keep it ghetto
as an '87 Regal with the tree air freshener on the rearview mirror
I wear a heart on my shoulder
'Member when we used to make the boost look like Motorola?
Your cousin fucked up your room every time he came over
Then went to jail when we got older
That shit is a bad odor, but still I remain focussed
In due time, I'll be able to swipe my card and it won't say decline
That shit's embarrassing huh
Hope no one pay you no mind
But it's a bad bitch behind you while you standing in line
Can you relate to my story? Can you follow my dreams
and admirations that I had ever since I was thirteen?
My momma believed in me, she let me use her van to go to the studio
even though she know her tank is empty, that's who I do it fo'
My pops got a different approach, yeah he believed
But he always questioned when I'ma drop my debut CD
How long this gon' take nigga? You still haven't ate nigga
At twenty-two I had two cars and my own place nigga
It's a sacrifice I try to tell him
That's when he turn to BET and tell me that he jealous
of all these niggas getting money and their shit don't sound like shit
I ate tryna kill your confidence or forcing you to quit
I just wanna hear you heard

[Chorus]
Yep, yep, that's my word
Make a statement with these nouns and verbs
I represent the liquor that's poured out on the curb
Listen to my nouns and verbs (man I wanna be heard)
Like a cattle with sheep
While y'all sleep I re-up, cooking up all day
like a mad scientist in that laboratory
Motherfuck what a critic got to say, I'ma be heard

[Kendrick Lamar]
What up Dasan? I ain't forgot nigga
You developed me, telling me I was hot nigga
You believed in me first, that's what's for sure
At the church recording, at the garage, but it worked
But me and Dave kind of felt you lost the passion
A lot was going on in your life and you needed space
But still I should have came to you first to tell you what happened
But I was seventeen and figured it's best I stay away
And I wrong, I was young and couldn't look you in the eye for what I'd done
But I'm telling you we ain't done
Matter of fact, how's your sons? What they up to?
Remember they used to run away while you had worked on ProTools?
People I used to be in the booth till four in the morning
with school in the morning, yawning, but I was on it
Me, you and Dave was on it
Buzzing like Charlotte Hornets when that tape dropped
Where them beats nigga? It's been five years since we had rocked
Time to be heard

[Kendrick Lamar]
So can you feel it?
When you hear it do it pulsate your spirit?
Does it make you wanna say motherfuck a gimmick?
The truth can set you free if you Do the Right Thing
Word to Spike Lee, don't he look like Sounwave?
That's kinda random, but my humor sometimes strays, like a dog in the night
Twenty-four hours in a day but only take five minutes
to grab a pad and a pen, then send your dog a kite
I spread love like a Hippy, but I'm a (Black) one
with Jesus Christ passion, I swear on the bible
Tabernacle to all my rivals, I ain't mad
You hate a nigga for tryna help you, that's your bad
because I figure I can make a way with these stanzas
I probably can't heal cancer, but I can heal the city
My niggas, tell me you with me
And if you is won't you pop my CD in
Open up your trunk, then let it bump, so I can be heard
Yeah, uh huh