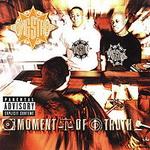 Gang Starr — You Know My Steez

You Know My Steez

[guru]
That makes me know that, we we we we're doin
We had the right idea in the beginning
And and we just need to maintain our focus, and elevate
We what we do we update our formulas
We have certain formulas but we update em (oh right)
With the times, and everything y'know
And and so.. y'know
The rhyme style is elevated
The style of beats is elevated
But it's still guru and premier
And it's always a message involved

[guru]
Who's the suspicious character strapped with the sounds profound
Similar to rounds spit by derringers
You're in the terrordome like my man chuck d said
It's time to dethrone you clones, and all you knuckleheads
Cause mc's have used up extended warranties
While real mc's and dj's are a minority
But right about now, i use my authority
Cause i'm like the wizard and you look lost like dorothy
The horror be when i return for my real people
Words that split wigs hittin like some double desert eagles
Sportin caps pulled low, and baggy slacks
Subtractin all the rappers who lack, over premier's tracks
Severe facts have brought this rap game to near collapse
So as i have in the past, i whup ass
Droppin lyrics that be hotter than sex and candlewax
And one-dimensional mc's can't handle that
While the world's revolvin, on it's axis
I come with mad love and plus the illest warlike tactics
The wilderness is filled with this; so many people
Searching for false lift, i'm here with the skills you've missed
The rejected stone is now the cornerstone
Sort of like the master builder when i make my way home
You know my steez...

The beat is sinister, primo makes you relax
I'm like the minister, when i be lacin the wax
I be bringin salvation through the way that i rap
And you know, and i know, i'm nice like that
Work through worldly problems, i got the healing power
When the mic's within my reach, i'm feelin more power
Stealing at least three minutes of every rap radio hour
It's often easier for one, to give advice
Than it is for a person to run one's own life
That's why i can't be caught up in all the hype
I keep my soul tight and let these lines takes flight
The apparatus gets blessed, and suckers get put to rest
No more of the unpure i got the cure for this mess
The wackness is spreadin like the plague
Mc's lucked up and got paid but still can't make the fuckin grade
How many times are wannabe's gonna lie?
Yo they must wanna fry, they can't touch the knowledge i personify
I travel through the darkness carrying my torch
The illest soldier, when i'm holding down the fort
("you know my steez"
You know my steez..)

"let em know, do your thing y'all" "keep it live"
"you know my steez"
*repeat 4x with very last line modified as follows*
"the mic..."

On the microphone you know that i'm one of the best yet
Some punks, ain't paid all of their debts yet
Tryin to be fly, ridin high on the jet-set
With juvenile rhymes makin fake-ass death threats
Big deal, like en vogue, here's something you can feel
Styles more tangible, and image more real
For some time now, i've held the scrolls and manuscripts
When it's time to go all out you be like, "damn he flipped"
Now i'm sick, fed up with the bullshit
Got the lyrical full clip, giving you a verbal asswhip
Don't trip it's the gifted prolific one
Known as bald head slick -- why is the press all on my di-dick?
My style be wilder, than a kamikaze pilot
Don't try it, i'm about to start more than a friggin riot
Styles unsurpassable, and nuccas that's suckas, yo
Them motherfuckers are harrassable
For i be speaking from my parables and carry you beyond
The mic's either a magic wand
Or it gets tragic like the havoc of a nuclear bomb
Then i grab your palm, no pulse you're gone
And if you thought we'd lose our niche in this rap shit you way wrong
I stay up, i stay on, shine bright, like neon
Your song's, pathetic, synthetic, like rayon
Fat beats, they play on, want dope rhymes, put me on
Word is bond... you know my steez